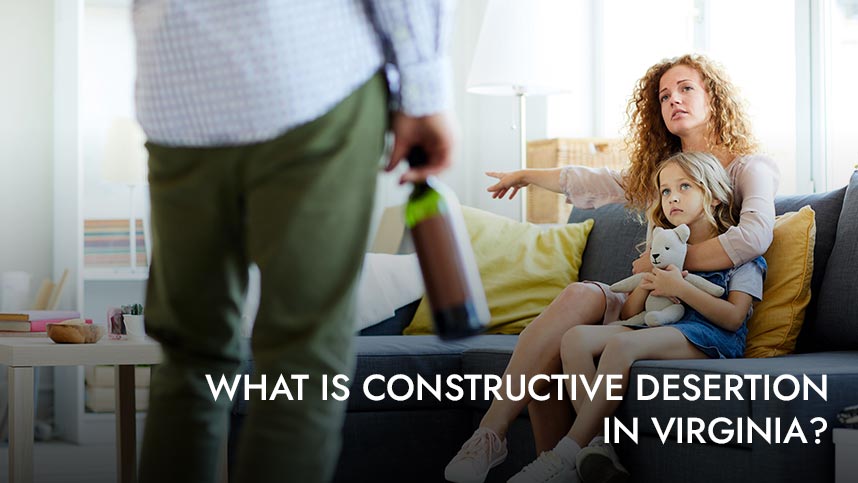 Some people find themselves in a situation where their other half no longer participates in the marriage, fulfills their marital roles, or even acts so cruelly that it prompts thoughts of leaving. These situations can feel like a trap, but could they be enough to initiate a divorce?

In Virginia, these scenarios may constitute “constructive desertion” and can be one of the grounds for divorce.

Desertion is one of the grounds for divorce in Virginia– but, it doesn’t always mean that the deserting spouse has physically left the residence. “Constructive desertion” is a kind of desertion where the spouse physically stays at the marital home, but is acting like they’ve left the relationship. Examples are:

If one spouse engages in the above behavior and this prompts the other spouse to move out, the person who would be guilty of constructive desertion is the spouse who was acting cruelly, not the spouse that had to leave.

However, it’s crucial to consult with a lawyer before moving out of your marital home, even if you feel your spouse has essentially abandoned the marriage. You’ll need to prove their constructive desertion to the judge to succeed in using it in your favor. If the other camp argues that you left the home without just cause, they could turn the tables and accuse you of desertion.

If you decide to file for divorce on grounds of desertion, you’ll need to work with a competent divorce attorney to legally prove that your spouse has constructively abandoned the marriage. Helpful evidence to prove constructive desertion include:

How Long Does Constructive Desertion Have To Be?

Like actual physical desertion, constructive desertion has to occur at least a year before the “innocent” spouse can get a divorce decree under Virginia law. However, the Virginia Code (§ 20-81) states that if the neglectful spouse has provided no support for 30 days, it is evidence that they have intent to abandon the family. This doesn’t automatically make them guilty of desertion, but it strongly supports a divorce petition on such grounds.

Marital issues like desertion can be a legal maze. Make sure you have sound legal guidance in making big decisions or changes to your home life. Get the help of a divorce attorney from Holcomb Law, P.C.- our firm is top-rated in Virginia Family Law and has garnered the Client’s Choice award for our effective service to individuals and families. We can help you resolve your marital matters with sensitivity and nuance.