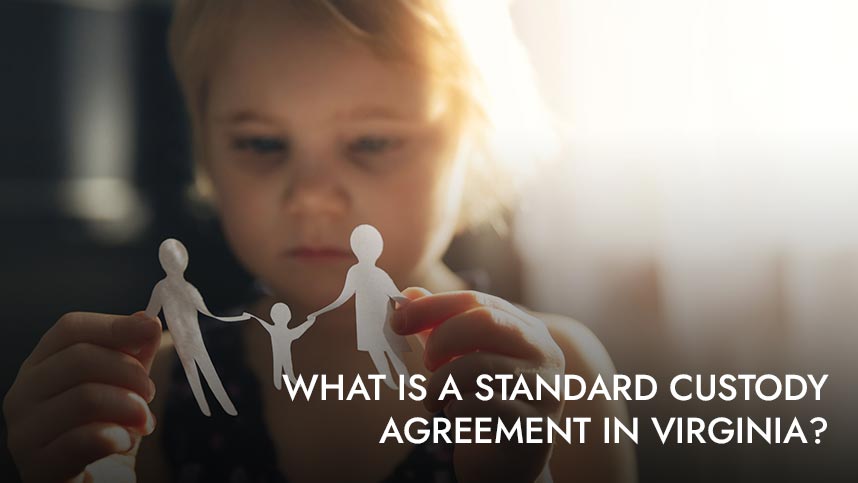 A standard custody agreement gives parents certain basic rights and a certain amount of set time with their children. In most cases, a standard agreement grants one parent custody and the other parent visitation rights.

The details of co-parenting are spelled out in a custody agreement (also known as a parenting plan). It assists parents in managing their rights and obligations, meeting the needs of their children, preventing or resolving conflicts, and making long-term plans.

Preparing a Parenting Plan in Virginia

Determining which parent will have custody of the child is the first step in developing your parenting plan. In Virginia, judges are intended to assess all possible custody arrangements fairly, with no presumption that one is better than the other going into a case. As a result, when the parties create a parenting plan, they do so on an equal basis in terms of the law.

What should you include in your standard custody agreement?

The child’s upbringing is governed by rules. The standard custody agreement should include co-parenting provisions on how the parents will handle important decisions in the child’s life The provisions spell out how parents make decisions about their children’s medical and dental treatment, education, religious activities, and how conflicts are resolved. A way for modifying the custody arrangement should also be included.

A custody and visitation schedule is included in the formal child custody agreement. A schedule specifying when the child is with the parent, a holiday and vacation calendar, and a special events timetable are all included in the agreement (when the normal schedule will change).

In this arrangement, the child lives with the custodial parent, but both parents have the authority to make key decisions for the child. In  one typical variation of this approach, one parent is given responsibility over certain areas while the other parent is given authority over others. For instance, the mother decides on education and extracurricular activities, while the father decides on healthcare, and both parents have a say in religious upbringing.

When the children have shared physical custody, they spend nearly the same amount of time with each parent during the year. This can be accomplished through various parenting plans. The parents usually retain shared legal custody (i.e., decision-making authority) in this situation.

Should you involve an attorney in creating a parenting plan in Virginia?

A parenting plan can be created without the participation of an attorney, but having one for each side is a good idea. An expert family law attorney will advocate for their client’s best interests and ensure that the plan is equitable for all parties involved. Your lawyer will be knowledgeable with the many parenting plan alternatives and will work closely with you to listen to and understand your needs before assisting you in developing the plan that best meets your needs.

Child custody disputes are complicated and aggravating. You will feel relieved if you have Holcomb Law’s legal team on your side throughout the procedure. We’ll create an agreement that is in the best interests of the child, whether you’re a mother or a father.