Jail Time and a Criminal Record?

Virginia Reckless Driving can be exasperating: for example, if you are stopped for driving only 81 mph in a 70 mph zone, you can be charged, not with a speeding ticket, but with a CRIME. Reckless driving by speed is defined as driving over 20 mph over the posted speed or over 80 mph anywhere in the Commonwealth. If you are convicted or you plead guilty, you will NOT have a traffic record, but a CRIMINAL record… for LIFE.  You need a Reckless Driving Traffic Lawyer who “wrote the book on Reckless.” Download it, give it a read, and give us a call. We can help.

Irrespective of the maximum speeds permitted by law, any person who drives a vehicle on any highway recklessly or at a speed or in a manner so as to endanger the life, limb, or property of any person shall be guilty of reckless driving.

Many believe that Reckless Driving is merely a traffic ticket. Not so!  People believe that they can represent themselves, like at Traffic Court, and simply tell their story and the Judge will understand.  Not so again!  Even attorneys who get charged with Reckless Driving themselves hire a traffic lawyer to represent them! They know this is not a game.

A VA Reckless Driving charge is a time sensitive issue.  If you are convicted, in only Ten days, you lose your ability to appeal, and after 21 days, a judge cannot overturn the conviction. The best time to address this charge is IMMEDIATELY, and at the latest, well before your initial court date.

Furthermore, you can be charged with Reckless Driving due to circumstances outside of your control.  If you were to get into an accident, and your brakes are found to be faulty, you can be charged with Reckless Driving. Despite the fact that you didn’t know that your brakes were faulty, and even if your vehicle recently passed inspection, making the accident the inspector’s fault due to his oversight, you can still endure the consequences of a conviction.

Also, simple driving errors can result in a charge. Everyone makes mistakes, one of the most common being forgetting to use your turn signal. Even if there is ample space for passing and nobody’s life has been put at risk, you could be paying higher insurance premiums for years, merely because a predatory cop felt like harassing you.

When you have been charged with a crime in Virginia, you absolutely need a criminal defense attorney–there is simply too much at stake.  Like a DUI, a Reckless Driving Charge in Virginia is a Class 1 Misdemeanor, the “highest” class of Misdemeanor, carrying a potential sentence of up to 1 year in jail and/or a fine of up to $2,500.  It’s shocking, but true.

Every person convicted of reckless driving under the provisions of this article who, when he committed the offense, (i) was driving without a valid operator’s license due to a suspension or revocation for a moving violation and, (ii) as the sole and proximate result of his reckless driving, caused the death of another, is guilty of a Class 6 felony.

In addition to a fine, people convicted of Reckless Driving face other financial punishments.  Following a conviction, insurance premiums are guaranteed to rise and last for many years. Furthermore, like those who are convicted of DUIs, Reckless Driving Convicts can experience a falling out of favor with their employers and might be in danger of losing their jobs.  These unfortunate folks might also have a difficult time finding new work, because the Reckless Driving Charge is on their criminal record that is examined in mandatory employment background checks.  Reckless driving can destroy your livelihood!

NOTE: Do you know that, once you are charged in Virginia, this criminal matter remains on your personal record for life?  Even if you are not convicted?

If you have a charge or charges on your record for which you were not convicted and that you need eliminated, we can help you clear up both your Court and police records. These old criminal charges can negatively affect college admissions, employment opportunities, promotions, security clearances, and other important life events.  We can help.  See our free downloadable eBook on the right side of this page for important, even vital, information about your future.

In Virginia, even if you are innocent or were misidentified and charged, even if the criminal charge was dismissed or “nolle prossed,” or even if you were acquitted, THE CHARGE ITSELF REMAINS ON YOUR CRIMINAL RECORD FOR LIFE, leading employers, for example, to wonder what happened, or why you were charged at all, or they might think that you were actually guilty–unless and until you get the charge expunged. This may be vitally important to your future.  Read our book.  Let’s talk.

Holcomb Law, P.C.
Reviewed by Clive on
Feb 12th, 2017.”I got a speeding ticket in Virginia”
I got a speeding ticket in Virginia. I live in Maryland. Because it was for 65 in a 45 I was looking at a 2,500 fine, 1 year in jail, 6 months suspended license, 6 points on my record, which would then raise my insurance for 11 years. We walked into court and Mr. Holcomb showed the trooper and the judge a few items, asked me to speak and we walked out, with no fines. Had I been crazy enough to go to court without him, I KNOW FOR A FACT that I would have been fined and paid an exorbitant amount on my insurance. This man saved my sanity. When the judge ruled not guilty it took everything in me not to fall apart. I highly recommend using Mr. Wayne Holcomb.
Rating: 5.0

Get Instant Access to Our Free Ebook "How Much Trouble Am I in Now: The Shocking Truth About Reckless Driving in Virginia" 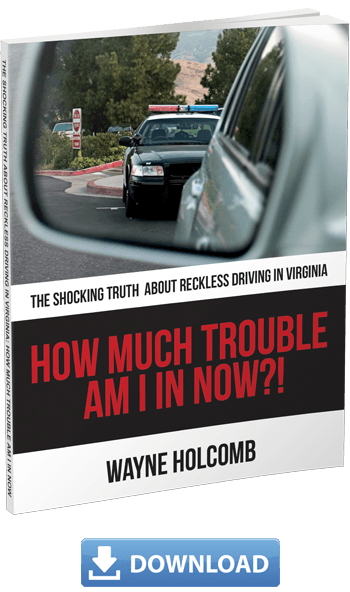